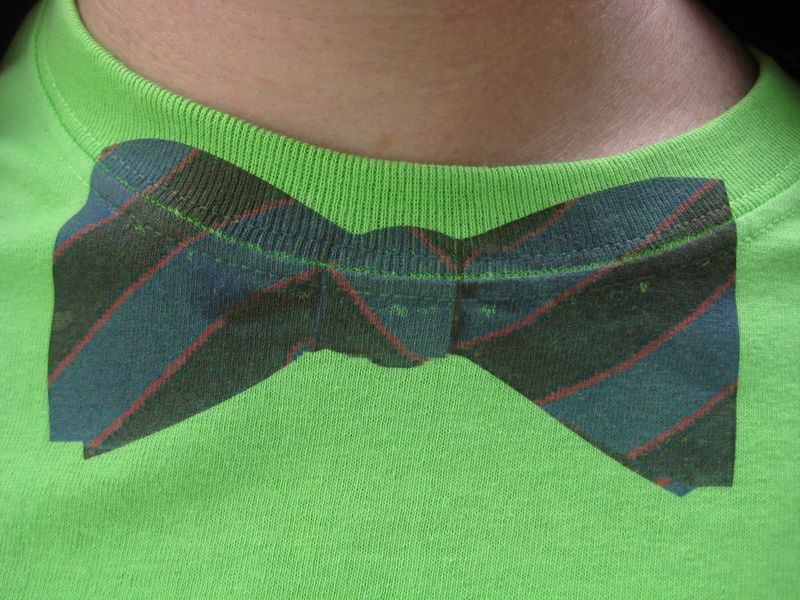 This was the second year that Mike and I walked in the Alzheimer's Memory Walk. We are lucky enough to walk with a fantastic group of friends on Team Good. Our team was organized by Kathy Good who's husband, Dave, was a judge here in Cedar Rapids. Dave could always be recognized by the bow ties he wore when he was on the bench. This admirable man began his battle with Alzheimer's while still in his early fifties. As a nod to his courage and sense of style the tee shirts our team members wear all sport various patterns of bow ties. We were especially proud this year that our team was 200 members strong and that there were over 800 walkers in Cedar Rapids. 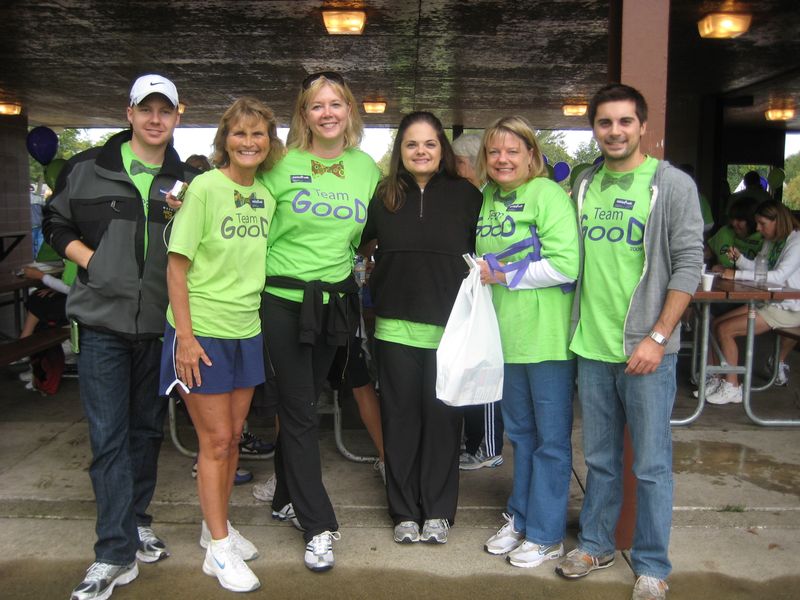 This year we even got some of our kids involved. Thanks for participating Page, Kate, Liz, and Theo and thanks Liz for these pictures since I camera fouled for this event. 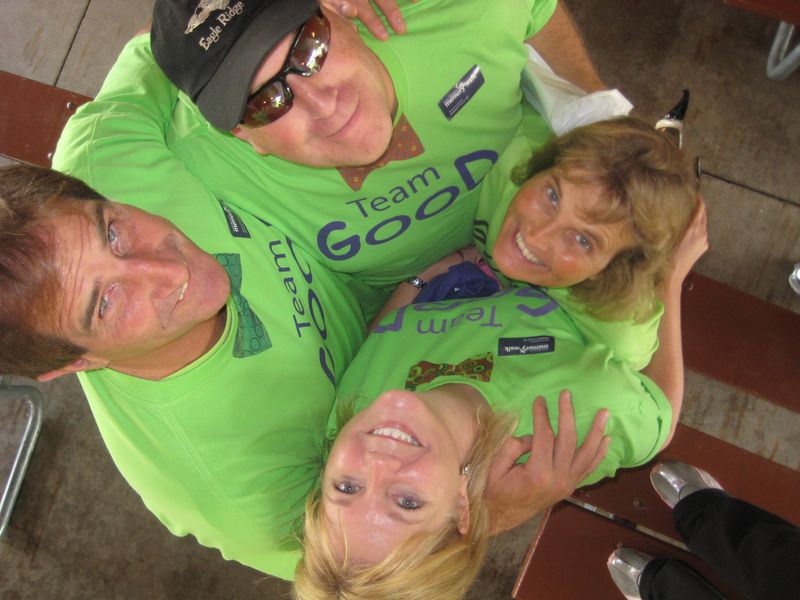 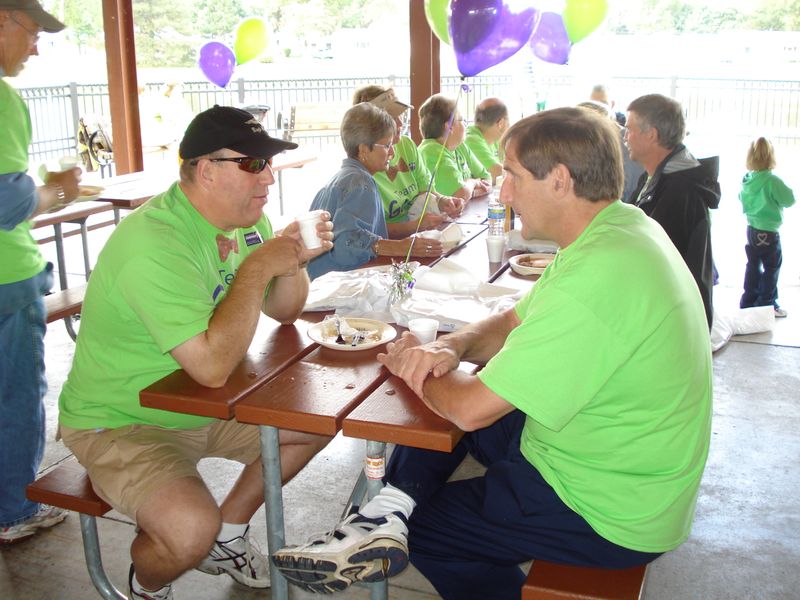 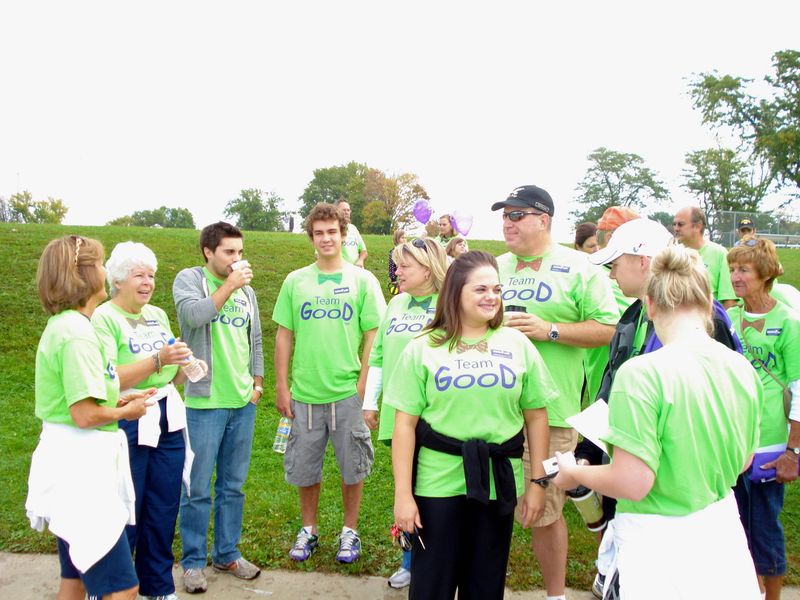 Last September when we walked my dad was suffering with Alzheimer's.  Our family knows first hand the devastating effects and the emotional and financial tolls of this insidious  disease. I never dreamed when we participated in this event last year that Dad would only be with us a few more short weeks. My dad had been diagnosed about five years earlier and was  classified as being in the middle stages. Because many Alzheimer's patients live a long time with this disease the costs associated with Alzheimer's  can be disastrous for so many families. With our country's aging population it is imperative that we get congressional funding for more research or the impact on our economy for the long-term care of Alzheimer's patients will be crippling.

We lost Dad in October after a fall and these flags bearing his name were very special to me. It makes me feel good to know he has not been forgotten.  We marched this year for Dad but also for the numbers of people and the loved ones that care for them that continue to fight this battle on a daily basis.

Thank you to all that gave so generously, thank you Kathy Good for your tireless support for this cause, and thank you to the thousands and thousands of walkers that participated nationwide. 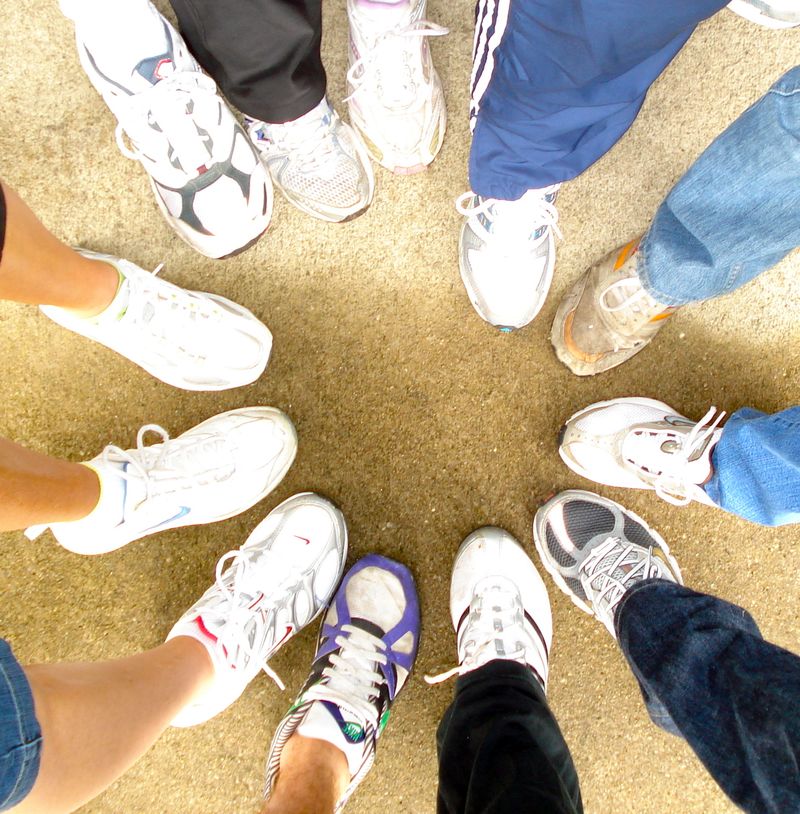 Please contact your local Alzheimer's Association for information on a Memory Walk in your area. If you live near Cedar Rapids we would love to have you lace up your walking shoes and join us next year as we walk in the 2010 Memory Walk to raise money and awareness for  Alzheimer's  so that someday none of us will have to suffer or watch someone we love suffer from this heart breaking disease. 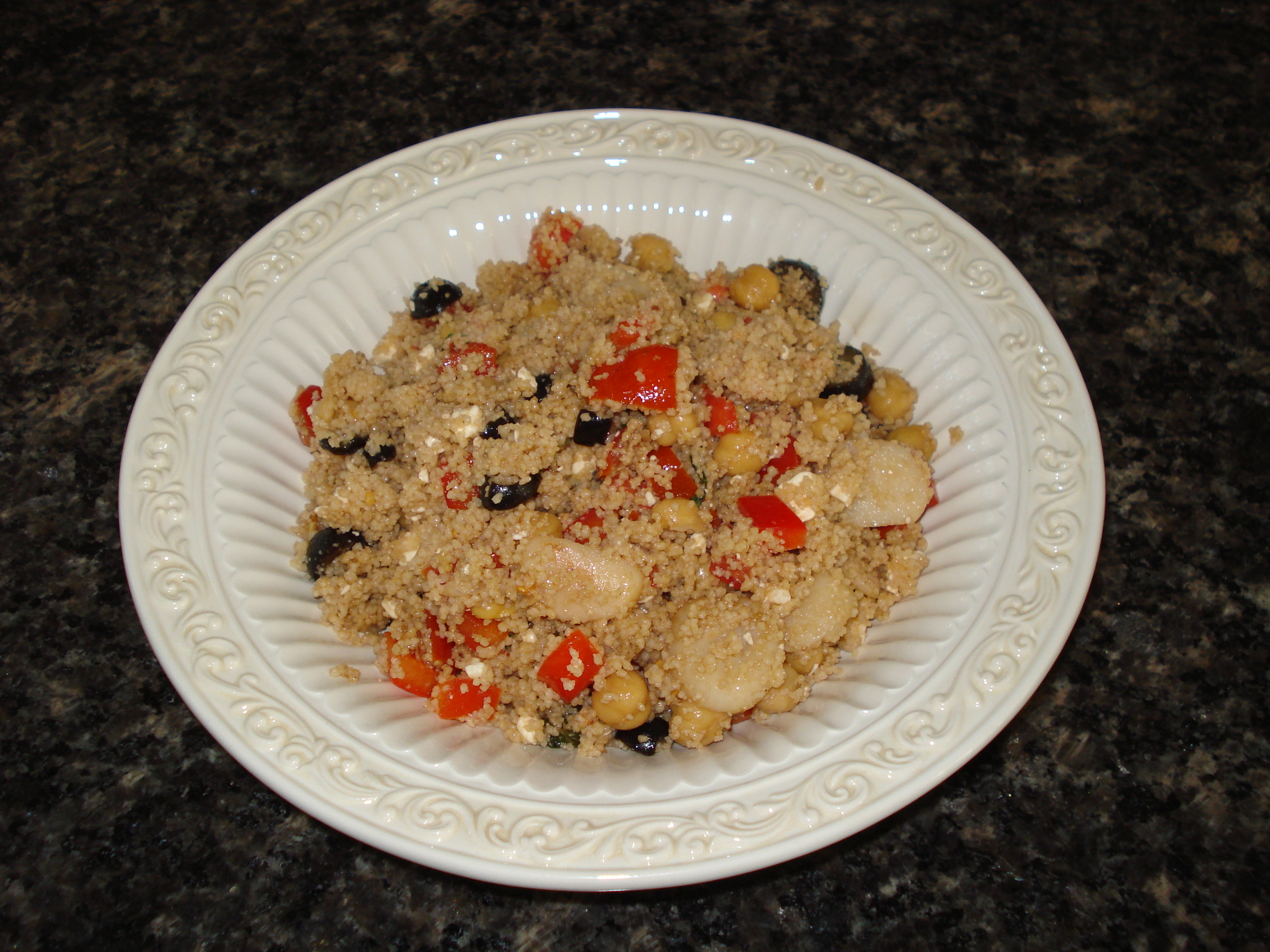 Those of you who know me know that my creativity does not extend to the kitchen. I usually avoid cooking at all costs but sometimes it is inevitable. Part of the drudgery for me is just figuring out what to make. Then I discovered this gem. The blogstress of this delightful site is bff''s with my daughter. Are they really so grown up???? Lulu, our friend moved to Philly about a year ago and started this great cooking blog. She sooooooo reminds me of Julia and Julie. Actually they could have made the movie with our Lulu.

I love how this blog is laid out with all of the categories on the side, plenty of pictures (I'm very visual), and I heart the detailed directions. When I am cooking you can not assume that I know anything.

Lulu posted this Greek Couscous salad about a month ago when we were inundated with the gifts of tomatoes and cucumbers from a dear friend. I had hoped to make this last week but life got crazy like is so often does and by the time I was able to pull it all together I realized I was out of cucumbers. I substituted water chestnuts for texture but I wouldn't recommend that. I also changed out the green pepper for red because that just flies better in this house. Then I added olives for color and because I'm a believer that you just can't have a Greek salad without olives. It was quite yummy and healthy.

Go here for the actual recipe.

Two years ago my hubby saw a downturn coming in  the economy and more specifically in the auto business. He decided he wanted to diversify and started talking about a towing and recovery company. He knew nothing about this line of work other than his fascination with the cable show Wrecked. I didn't think he was really serious but I should have known better. He was looking for something that was a bit more recession proof to supplement his current business and he has always, as he says, "loved big trucks". A year and a half ago he bought his first tow truck and a building to keep it in. I would have preferred a diamond. It was fun, though, to see him excited about this new venture. He has always been a risk taker but he is also a pretty smart guy so I encouraged him to take that leap of faith. Six months later he bought a second truck and hired his first employee. Wow. The employee thing made it a bit scarier because now this wasn't just about us. Two years after the dream began he is up to four trucks and three employees. There is even a Hook'er Towing  website  ( be sure to watch the intro. I love the flash on this) thanks to our tech savvy son-in-law and Page Smith Designs (I love his intro too. Check him out in the top left corner of his site. Funny).

Lately all I have been hearing about is a red Feather-Lite car hauler/trailer that he has been bidding on via eBay. This same trailer has been up for auction three times and each time it goes unsold because the minimum wasn't met.  I know now that once my guy sets his sites on something like this he will probably end up with it - or at least one like it. For him the thrill is first in the hunt and then how cheaply he can purchase it. He sometimes tends to overlook the logistics such as where the item is or how to get it home. This latest acquisition was no exception. The trailer he found ... and by the way, do you know how hard it is to find a RED Feather-Lite??? Do you care? I have been told repeatedly that it is like finding a needle in a haystack. Anyway, the trailer he found was in North Andover, Massachusetts - a mere 1268 miles from home - EACH WAY. Being the fabulously devoted wife that I am, I didn't  want him to make this trip alone. So I actually volunteered to ride along. Such a sap. I'm thinking there must be a diamond in this for me some day. I was kind of dreading this trip and I can't lie and say it was awesome but the reality was much better than I anticipated. We did have fun rocking to the tunes, listening to the game on Sirius, and just sharing an adventure together. Instead of cosmetics and blow dryers I packed my ipod, iphone loaded with an audio book since I can't read in the car, a set of bad boy headphones and my laptop for when we stopped. Add in Mike's ipod, Blackberry, the invaluable Garmin GPS and his laptop and we were loaded for bear. We had more chargers than we did clothes. You can tell which item is mine. Even though I didn't wear much makeup I still moisturized :) 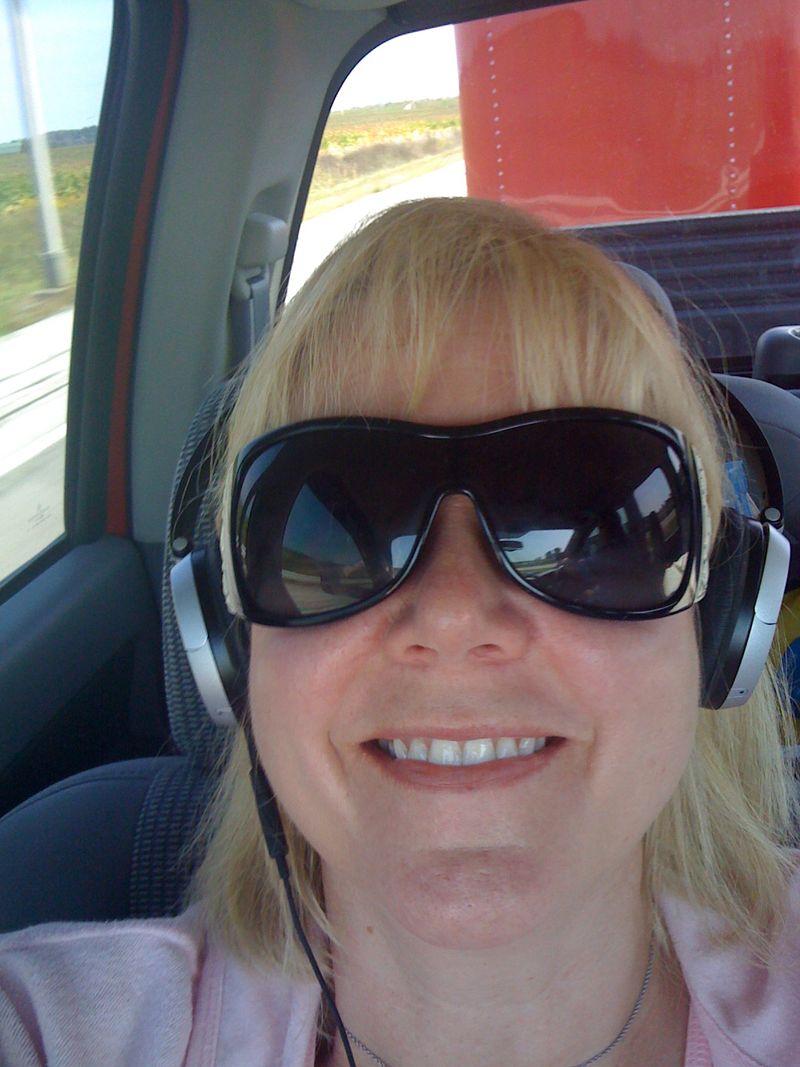 When I got bored I took pictures of myself or whatever was around me. 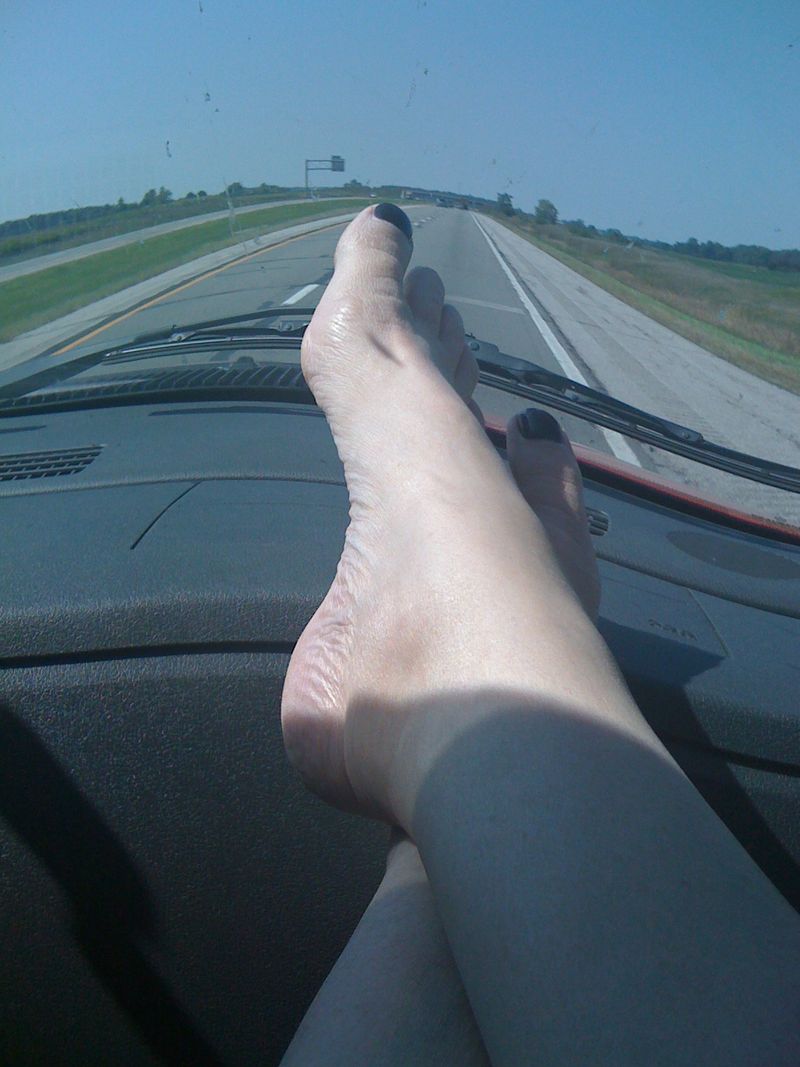 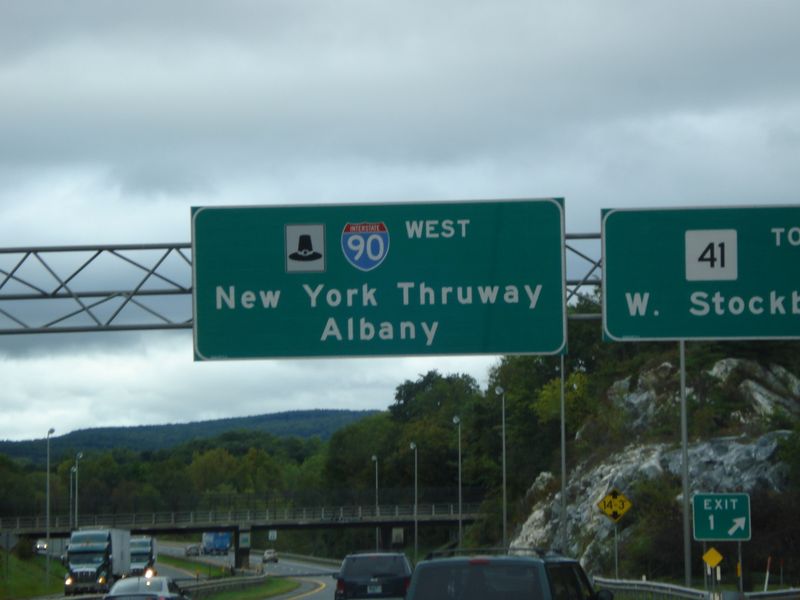 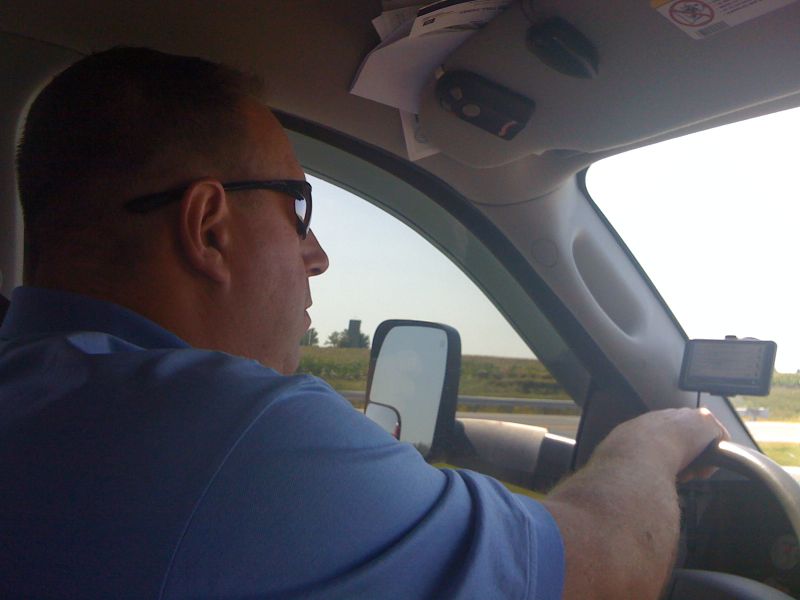 The upside was I had only flown and had never driven this part of the country. It is truly beautiful. We drove through Pennsylvania on 9/11 and I really wish we hadn't been squeezed for time because I really would have liked to have stopped in Shanksville, PA for the memorial services there.

Our reward when we got to Massachusetts was an incredible dinner of lobster, steamers, and shrimp and the discovery that  after two days in the car we still had stuff to talk about. 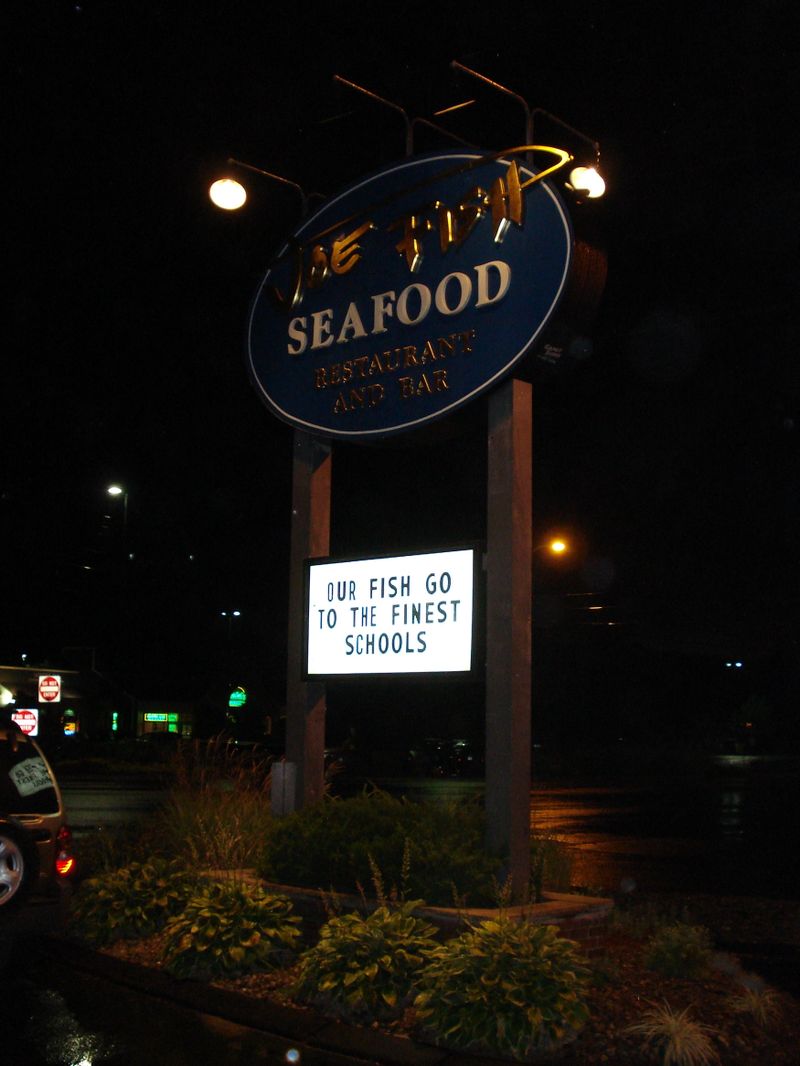 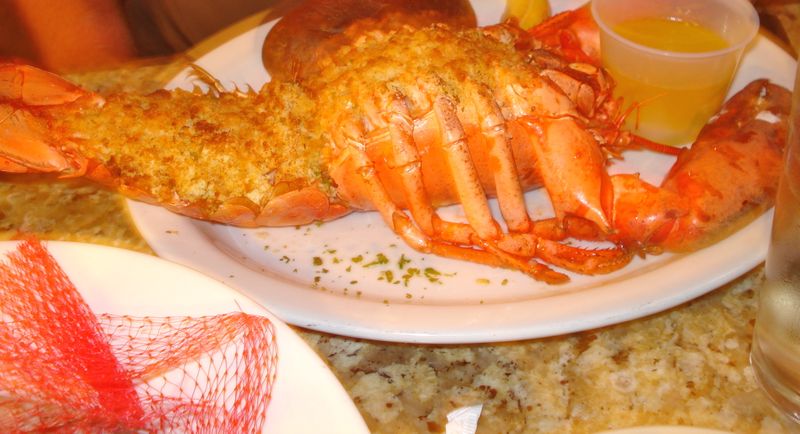 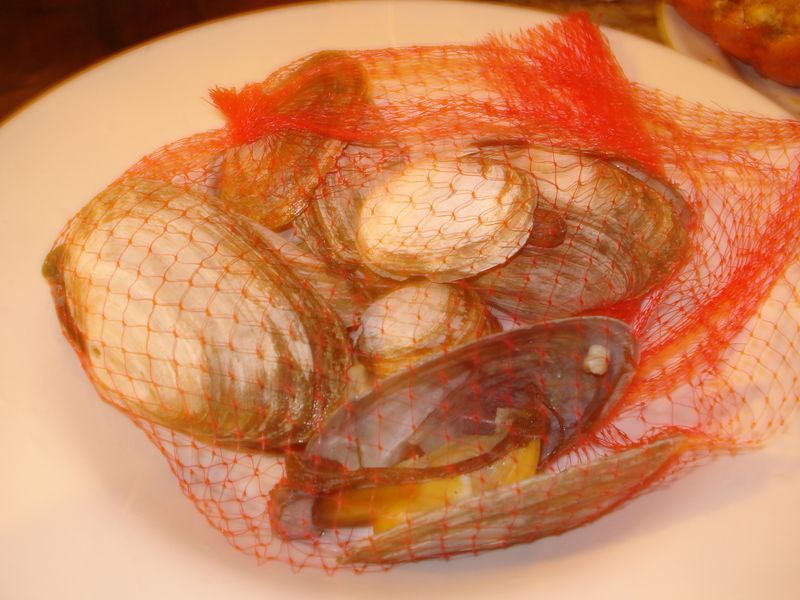 and of course a cosmo. 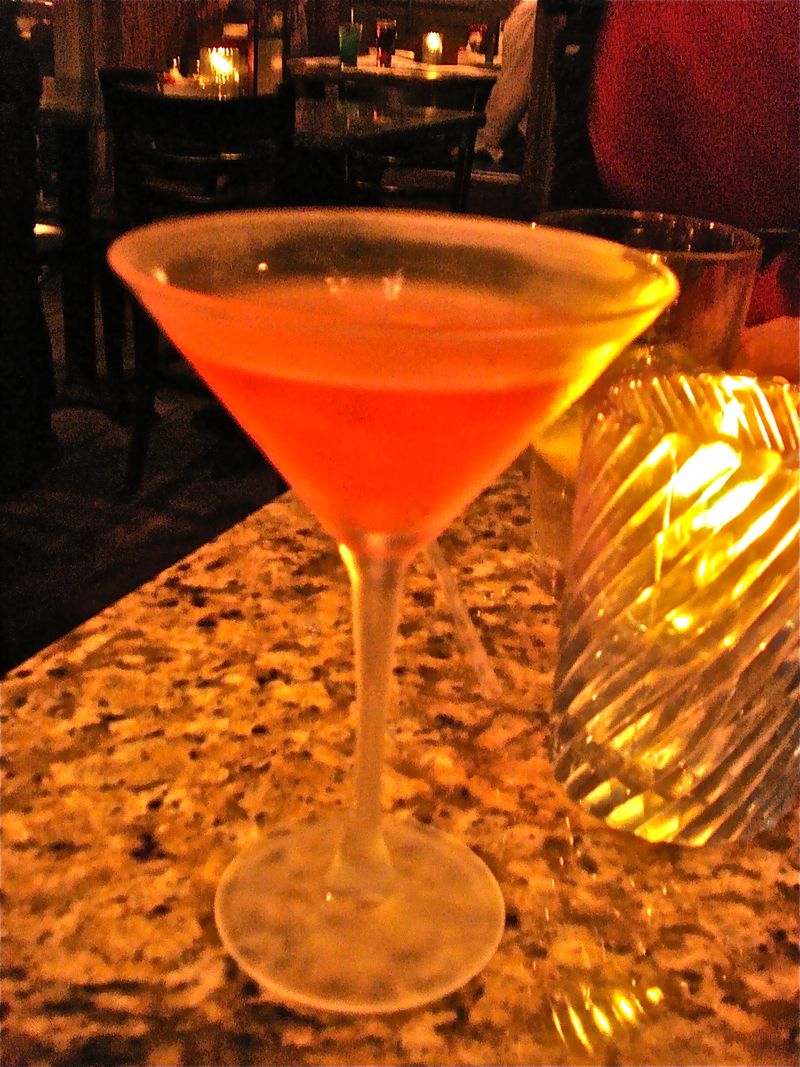 And yes we did get what we came for. TA DA.... here is the newest addition to the Hook'er Towing family. 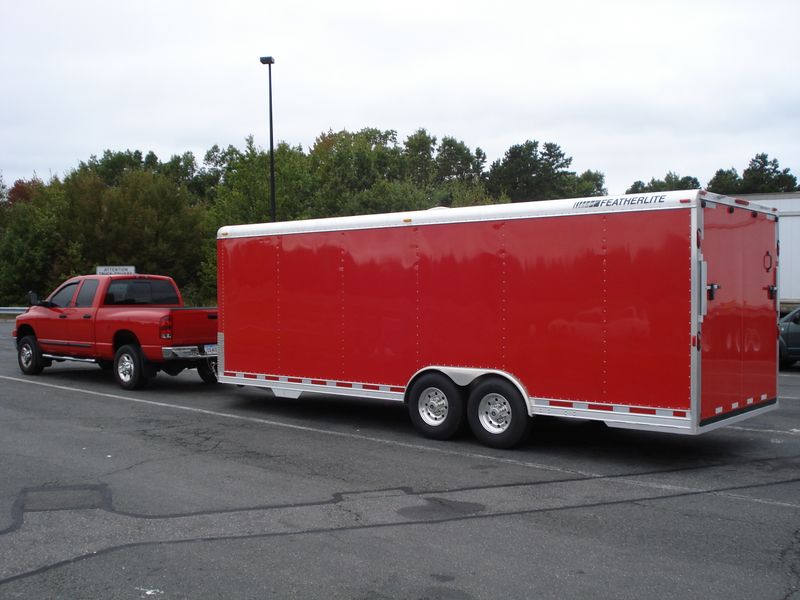 I'd still rather have that diamond !:)

Jon Aanestad - Songs from a City 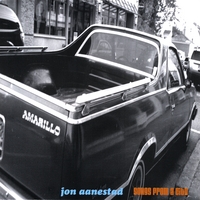 Jon Aanestad is on iTunes!

It's a bit alternative with a dash of country and a twist of blues and it's definitely good.

Stop by iTunes to hear this new sound. Right out of the box I would have to say City Living is my favorite song but they are all choice.

Congrats Jon and now we can say we knew you way back when.

Relish Each and Every Day 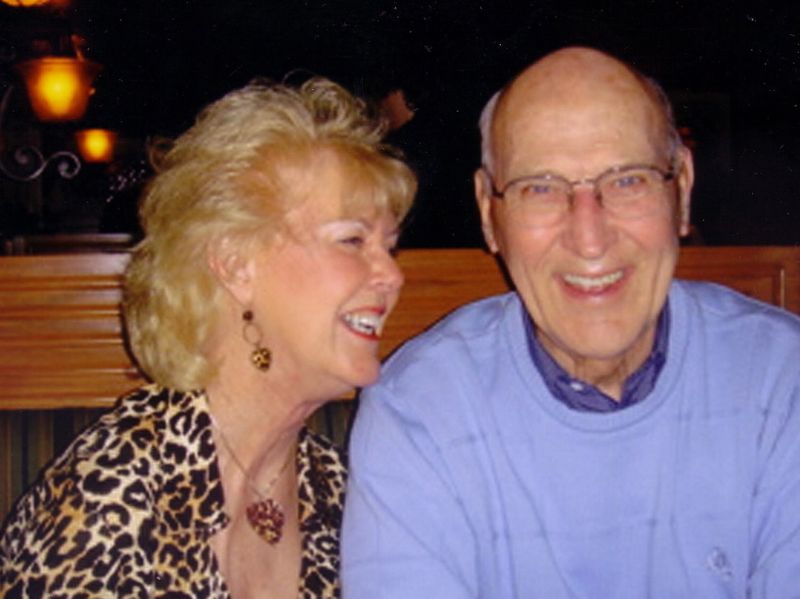 People come into our lives for a reason. Bringing something we must learn. And we are led to those who help us most to grow if we let them.
~ Wicked

This is a photo of my mom with her friend and partner who passed away this week.  It is bittersweet to see this picture of her looking so happy and yet I realize it is another reminder to relish each day for the gift that it is. 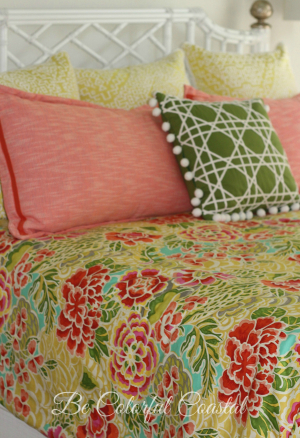 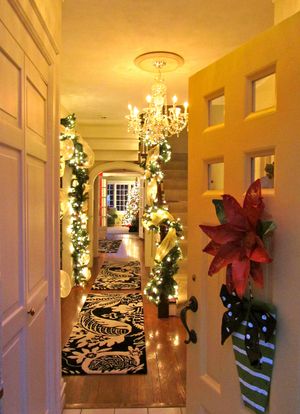